A teenage female was at a friend’s home babysitting for a few hours. Several hours prior, she took medication that caused her to feel lightheaded and eventually lose consciousness. Upon recovering, she placed a call for EMS services, but the location of the house was not known. A series of questions failed to yield where the house was located, and no one at the house knew the address. The teenager’s phone number was the only known piece of information. The location could not be identified via traditional methods as the call had not been placed via 911.

The communications operator deployed 911eye to her mobile phone, guided her through the process of connecting to 911eye, and the specific location was immediately identified. The location identified was not in the same jurisdiction where the initial call was handled, but rather a neighboring community.

EMS services were quickly dispatched to the home and a short time later the teenager was taken to a local hospital where she received treatment. 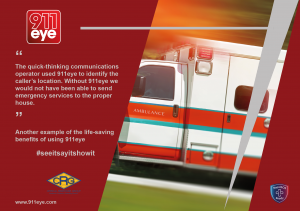