A group of citizens witnessed the assault of a male subject who was now on the ground at the front of a convenience store. The male was suffering from a laceration on the forehead and was bleeding profusely. As the call was placed to 911 for an ambulance to respond, the man was given basic medical treatment by employees from the store, but was in need of medical attention while incapaciated on the ground.

The situation was tense and the communications center deployed a 911eye link to a citizen caller to not only obtain a status of the injured male, but to also see if any further assaults were taking place. The video link was broadcasting the scene to the communications center with a clear view of the man on the ground, others attempting to keep him safe and stable on the ground, and that no further assault was in-progress.

Police and EMS arrived on the scene with an awareness of where the injured was on the ground, the condition of the man, and that it was safe for EMS providers to provide treatment as soon as they arrived. 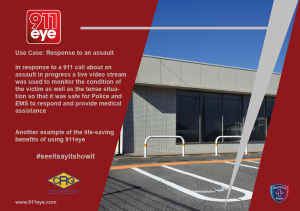